Check out the latest statistics & news about Coronavirus pandemic in U.S. state of Massachusetts. Get more information about total confirmed cases and deaths of Covid-19 for all Massachusetts Counties in the US.

School closures began in early March, when Massachusetts Institute of Technology announced on March 9 that it was moving to only-online classes for the remainder of the spring semester. Also on March 9, two elementary schools in the Plainville school district and one in Arlington were closed for the day due to COVID-19 tests being conducted on two parents and one child. School districts began closing on March 11. Within a week, many colleges and state school districts announced closures ranging from weeks to months in duration.
Wellesley and Framingham closed their public schools and libraries for two weeks on March 13. Also on March 13, Boston announced that its public schools would close for six weeks from Tuesday, March 17 through April 26.
On March 15, Governor Baker ordered all schools in Massachusetts closed for three weeks from March 17 through April 7. On March 25, he extended the closing through May 4.
– Wikipedia

Coronavirus in Massachusetts: Cases by county 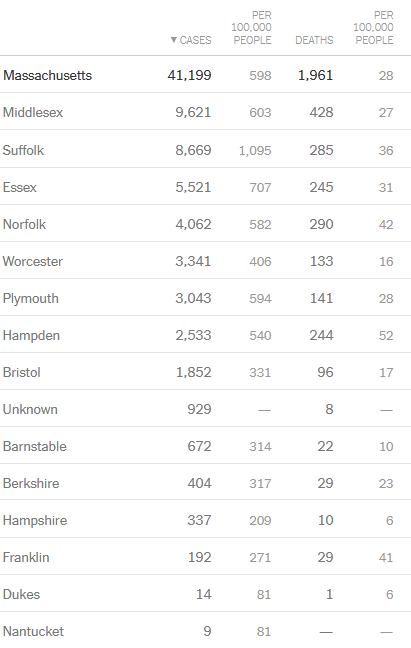